Ocean Plunder - We are the Pigs of the Sea! Home

Any politician anywhere in the world that does not speak out loudly against the practice of Shark fining, Drift netting, High seas bottom trawling, Longline fishing or Our plastic in our oceans is not worth a single vote.  Any such person that says that it is not their portfolio to speak out on such issues should line up for the dole.

If your Prime Minister or President or any other politician or, if your media: Television, Radio or Print don�t make the following issues a priority then they are nonsense.  If any intelligent person does not do likewise then they are selfish and pathetic.  No apologies for being blunt.

Note � the more your media give you Car accidents and Football as a priority instead of real issues then they are nonsense by default.

If there is no change in the way we are presently fishing and poisoning our oceans we will go down in history as �The two legged pigs of the sea�.  Those in power that allow this outrage to continue are environmental criminals.  If you think that this definition is a little emotive then perhaps its time you checked your priorities.

We are killing our oceans and that is a biological fact.  At the present rate of destruction the damage to our oceans is unsustainable and any person that says that this is an exaggeration is uninformed. 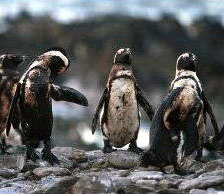 Oiled Jackass penguins, South Africa.
Look at the disgusting things that we do to our innocent fauna.

Driftnet Fishing an Abuse of the Global Commons

Did you know that thousands of tons of: turtles, fish, whales and dolphins are left dead to rot in our oceans every year.  This happens because of what are called �Drift net by-catch�; meaning that only the fish that are worth the most money are taken, the rest the (by-catch) are dumped.  Yes, thousands and thousands of tons every year.  Aren�t we civilised humans wonderful creatures?

The nonsense of saying that they are allowed to do this in so-called international waters is just that �nonsense�.  These waters belong to us all and must be protected for the future survival of our planet.  Any President or Prime Minister or any politician anywhere in the world who does not speak out against this outrage is by default, an accomplice; regardless of their portfolio.

This is one of the most destructive practices ever devised against our oceans and those that invented it and practice it must be some of the most arrogant, selfish and ignorant people on the planet.  If my words upset you, well bad luck because they are meant to; don�t we have enough environmental problems on the planet without pigs coming forth and inventing such a disgusting industry as High Seas Bottom Trawling.

Some of the countries responsible for this vandalism are:-

and those responsible have the gall to call themselves civilised.

It took Italian coast guard divers several hours to free five sperm whales, among them a calf who was completely entangled, from a fishing net in the Mediterranean Ocean in August 2004.  When all of the animals were finally cut free, they were covered with lesions, and it was a miracle that all of them survived the entrapment.........

If we do not do something about longline fishing, some species of the Albatross and many other creatures will soon become extinct. 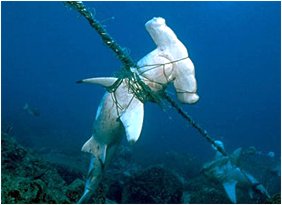 Shark Finning
SOS. Save our Sharks

All intelligent caring people - say no to Shark Fin Soup

The hideous practice of cutting the fins of a shark and then throwing the poor creature back into the sea alive cannot be called a civilized practice.  So by definition any person that has no concerns about such a practice would have to be called uncivilised.  The only reason people eat shark fin soup is because of the texture; the texture is cartilage.  There is no nutritional value in cartilage and nutritionally it has been likened to eating your fingernails or your hair.

Some estimate that the number of sharks plundered from our oceans for the shark fin soup industry amounts to around 100 million sharks a year.  Our oceans cannot sustain this obscenity.  No educated person could justify such a practice.  The main countries where shark fins are consumed are Hong Kong, China, Singapore and Malaysia, plus there are some restaurants in Australia that serve shark fin soup.  My suggestion is that you let such restaurants know your feelings and let them know that what they are doing is highly irresponsible and very destructive to our oceans. 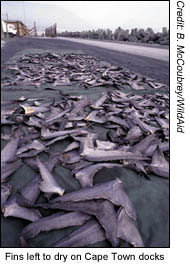 Our plastic in our Oceans 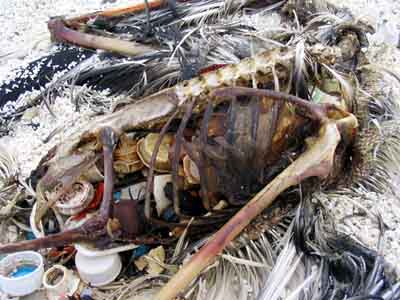 Bottle caps and other plastic objects are visible inside the decomposed carcass of this Laysan albatross on Kure Atoll, which lies in a remote and virtually uninhabited region of the North Pacific.  The bird probably mistook the plastics for food and ingested them while foraging for prey.

Millions of tons of garbage including plastics are dumped into our oceans every year.  When garbage lands in the streets, much of it gets washed down the drain and eventually ends up in the sea.  Turtles, whales, dolphins and many other sea creatures are choking to death on our garbage right this minute.

Does your Prime Minister or President care about what is happening to our oceans?  Do you care?  If you do care, tell your Prime Minister or your President so.  Tell them that you want to see action instead of jingoistic and patriotic drivel.  If they do not act then they are ignoring biological and environmental terrorism.  You know the old saying �If you are not part of the solution you are part of the problem�. 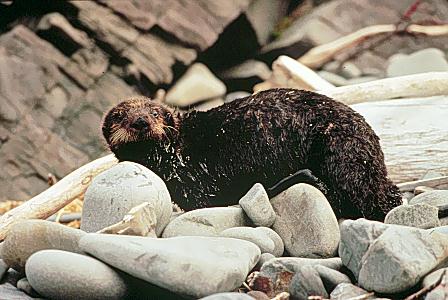