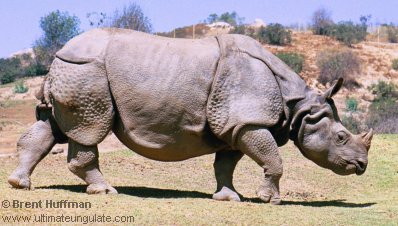 All of the Rhinoceros species are seriously endangered, two of them critically, and unless the world cares, two of them are soon bound for extinction.

The world spends billions on weaponry but barely the price of one missile to save the Rhinos; but the weapons industry is doing fine thank you very much.  Does your President or Prime Minister even care about this selfish obscenity?

Perhaps someone could convince the Chinese Government to educate their people, to stop paying for the slaughter of the Rhinos.

The Three Asian Rhinos
All the Asian Rhinoceroses are in trouble because of the demand for their horns.

JAVAN RHINOCEROS - (Rhinoceros sondaicus)
Critically Endangered and on the verge of extinction, less than 100 left.
The price of just one missile could save them.
Does your President of Prime Minister care?

SUMATRAN RHINOCEROS - (Dicerorhinus sumatrensis)
�The singing rhinoceros�
Critically Endangered and on the verge of extinction, perhaps about 300 left.
The price of just one missile could save them.
Does your President of Prime Minister care?

INDIAN RHINOCEROS - (Rhinoceros unicornis)
Endangered.
The Indians and Nepalese are trying to save them but they could do with a little help.

The Baluchitherium (EXTINCT)
(a Primitive Rhinoceros)

Believed to have been the largest land mammal of all time.
Estimated shoulder height of nearly 18ft (5.5 m).
Estimated weight of about 10 tons.