There is a big problem facing sharks worldwide.
There are about 400 species of sharks.  FAO figures estimate that sharks are vanishing at about 800,000 tons per year.  How long could any creature sustain this onslaught?  Many sharks just have their fins removed for Shark Fin Soup; the creature is often just thrown back into the sea alive.  We must stop this ignorant madness.  Would slow education be the answer or an international media blitz to fix it?  If this were happening to your family, you�d probably opt for a media blitz.  Intelligent people who know and care don�t eat shark fin soup.

Sharks on this page: - 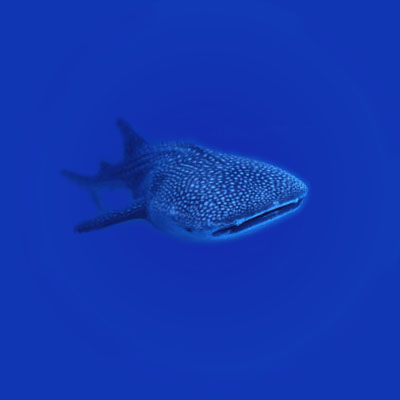 Whale Sharks and Basking Sharks are in big trouble because of the shark fin soup industry for the Chinese restaurants.  Some selfish idiots that run these establishments have been buying the huge fins of these giant sharks to advertise their soup houses.  So of course then, the fins from these hapless endangered creatures fetch the highest prices.  If this outrage continues �business as usual� then within a few years the world can wave good-by to these beautiful sharks; and there are many other species of sharks that are following in their wake.  Does anybody care? 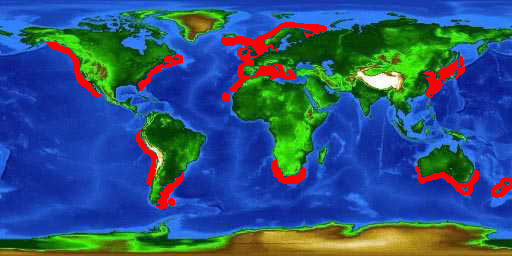 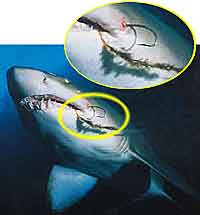 Strange and Pretty Sharks
Usually not regarded as dangerous.

Goblin Shark
(Mitsukurina owstoni)
A strange looking shark by any standard; and this is not a common shark.

Leopard Shark
(Triakis semifasciata)
The Leopard Shark is found off the West Coast of North America.

Blue Shark
(Prionace glauca)
This is one of the prettiest of the sharks.

Sawfish
Here are some of the seven or so species of the sawfish.
(Pristis zijsron, P pectinata, P perotteti)
Most sawfish are heading towards critically endangered.
Do not confuse these creatures with the Swordfish which have nothing to do with sharks.  Swordfish have normal bones like a fish whereas the bones of a shark are cartilaginous (cartilage like).

Potentially and Sometimes Dangerous Sharks
Some of these sharks never come near land so you would have to be bobbing round in the ocean to get into trouble with them.

Oceanic Whitetip Shark
(Carcharinus longimanus)
The Oceanic whitetip sharks could be much more dangerous to swim amongst than the Great whites however, because of the range of the Oceanic whitetip a person is much less likely to encounter one of these sharks because they truly are an oceanic species. 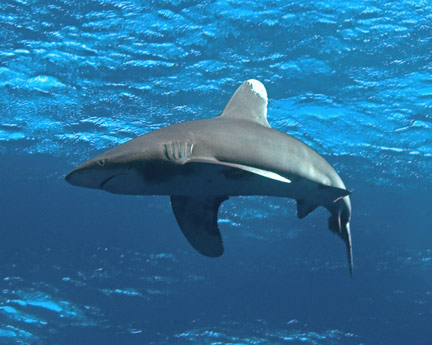 Bull Shark
(Carcharinus leucas)
This shark does sometimes travel for miles up rivers and is quite at home in fresh-water; and this is a dangerous shark.  There is a land locked number of Bull Sharks that live and breed in a lake in Nicaragua and they have never seen the sea. 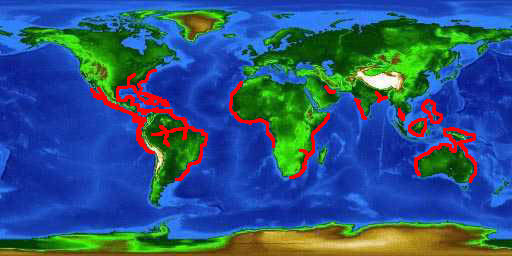 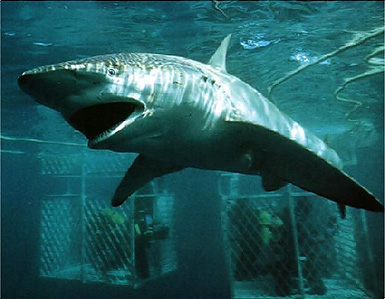 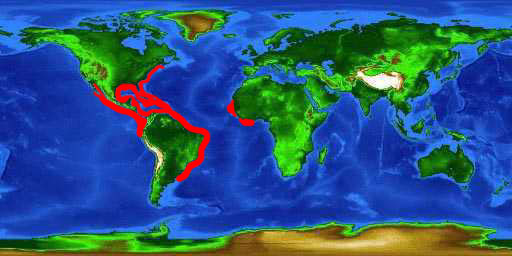 Hammerhead
There are more than a few species of hammerhead sharks.
Genus (Sphyrina)

Thresher Shark
(Alopias vulpinus)
The shark with the amazing tail. 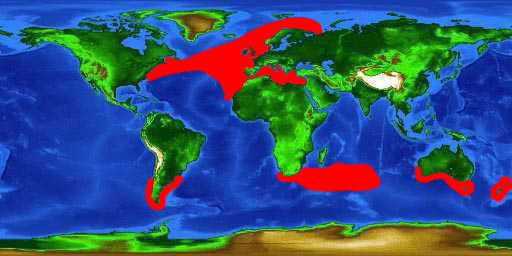 World distribution map for the porbeagle.